JOIN US for an fun & informative series of workshops with local farmers, chefs, nutritionists and herbalists! Each local food enthusiast will share their extensive knowledge. Designed to offer both creative education and place focus on a monthly regional crop, this class and demonstration will inspire and inform. Learn more about Sustainable CAPE’s Harvester Highlight Soup Kitchen Donation Program, designed to coordinate with this Harvester Highlight Workshops at libraries! To register for a workshop, please call 508-487-1125. 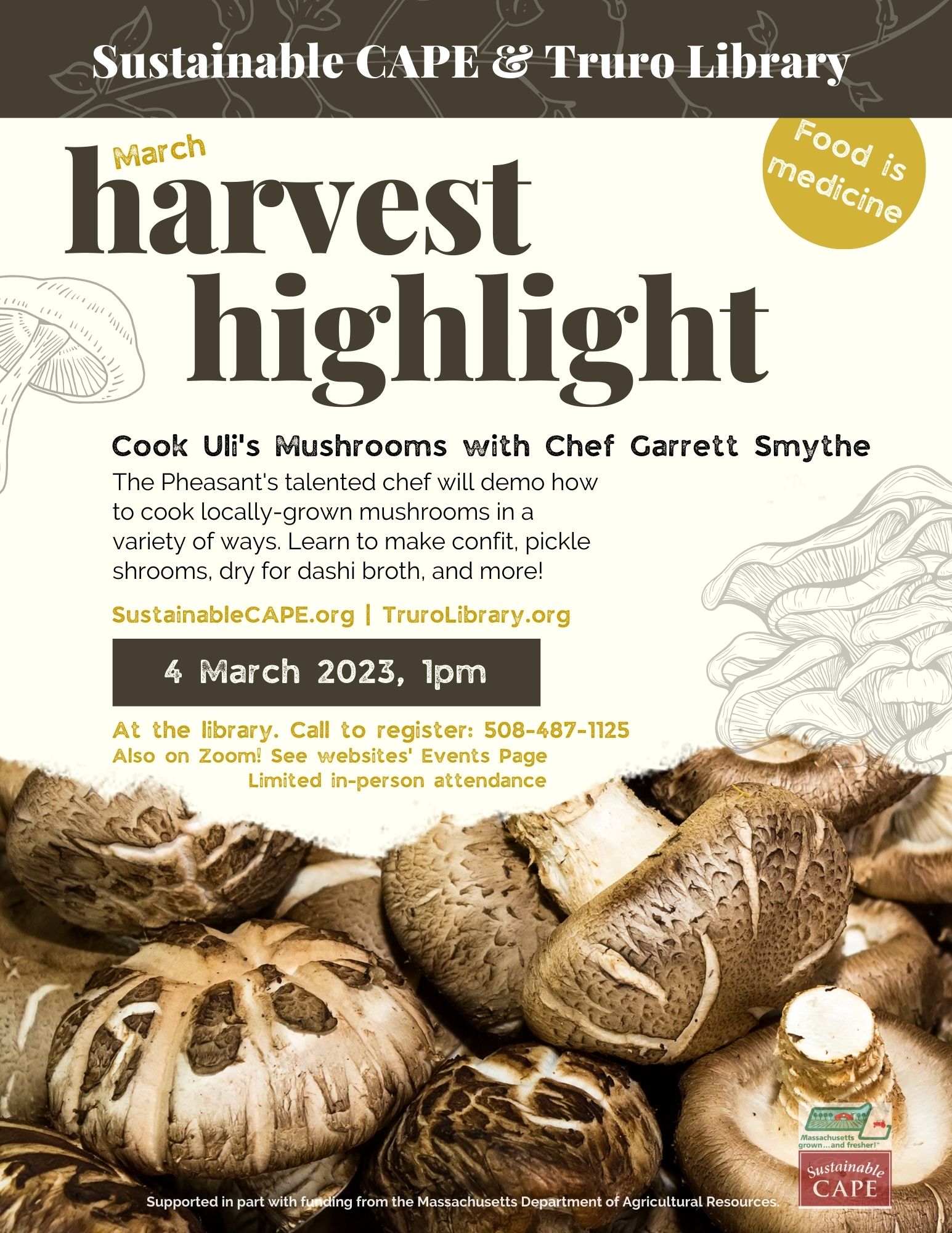 Interested in expanding and enhancing your culinary skills?  Like eating mushrooms but bored with how you prepare them?  Join us for a live cooking demo with The Pheasant’s talented chef, Garrett Smythe. Chef will teach how to cook Uli’s locally-grown mushrooms in a variety of ways.  Learn to make confit, pickle, dry shrooms for dashi broth, and more!

OUR PRESENTER, Chef Garrett Smythe has spent the last two decades learning how to cook, starting in 2004 at The Wicked Oyster in Wellfleet. A wide variety of cooking experiences in San Francisco, Boston, and New York City have helped him develop a deep appreciation of the joys and difficulties of cooking seasonally and locally. He is now very pleased to call the beautiful landscapes of Cape Cod his home. After spending six years as the chef/co-owner of Sunbird Kitchen in Orleans, he is currently enjoying a new opportunity as the chef of The Pheasant in Dennis. When not working, he is usually spending time with his wife Chelsea, and three young children, Milo, Lennon, and Rose, or walking a trail in the woods with his dog Etta. 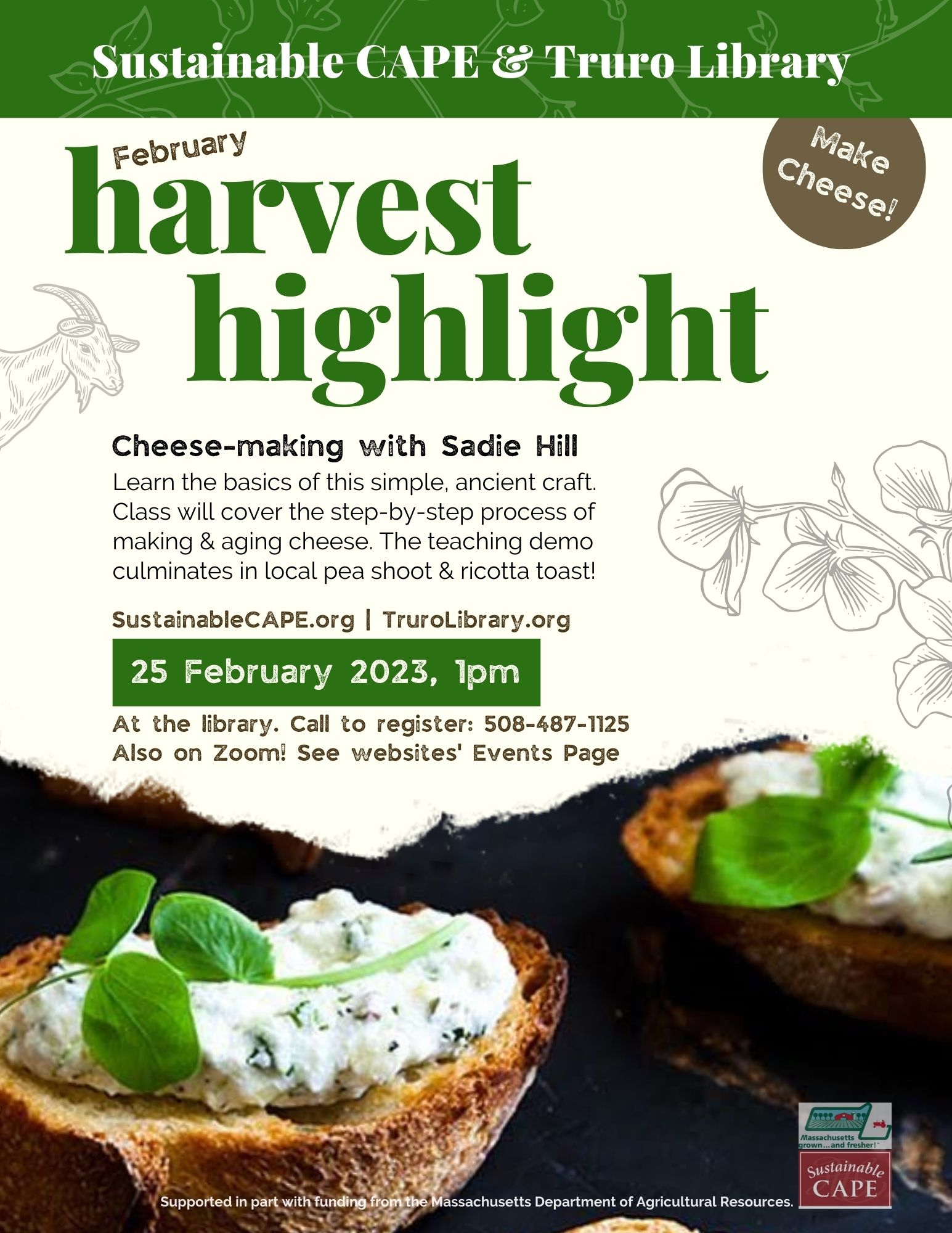 Are you interested in learning how to make cheese this winter?!  During class, local cheese-maker Sadie Hill will provide a discussion on the basics of cheese-making and give a live demonstration.  You’ll learn where to source equipment and supplies, the importance of quality milk, the steps & preparations involved, and a ricotta & pea shoot toast recipe.  Don’t miss out on learning an ancient craft and meeting a local maker.

OUR PRESENTER, Sadie Hill is an artisan cheese-maker and educator living on Cape Cod.  After visiting New England farms in search of goats for her herd, she noticed that most farms were making cheese!  Feeling inspired, she became a full-time cheese-maker and goat mama.  In 2016, Sadie opened The Two Goats School of Cheesemaking with the belief that it’s time to bring back the family cow and make cheeses in our kitchens! 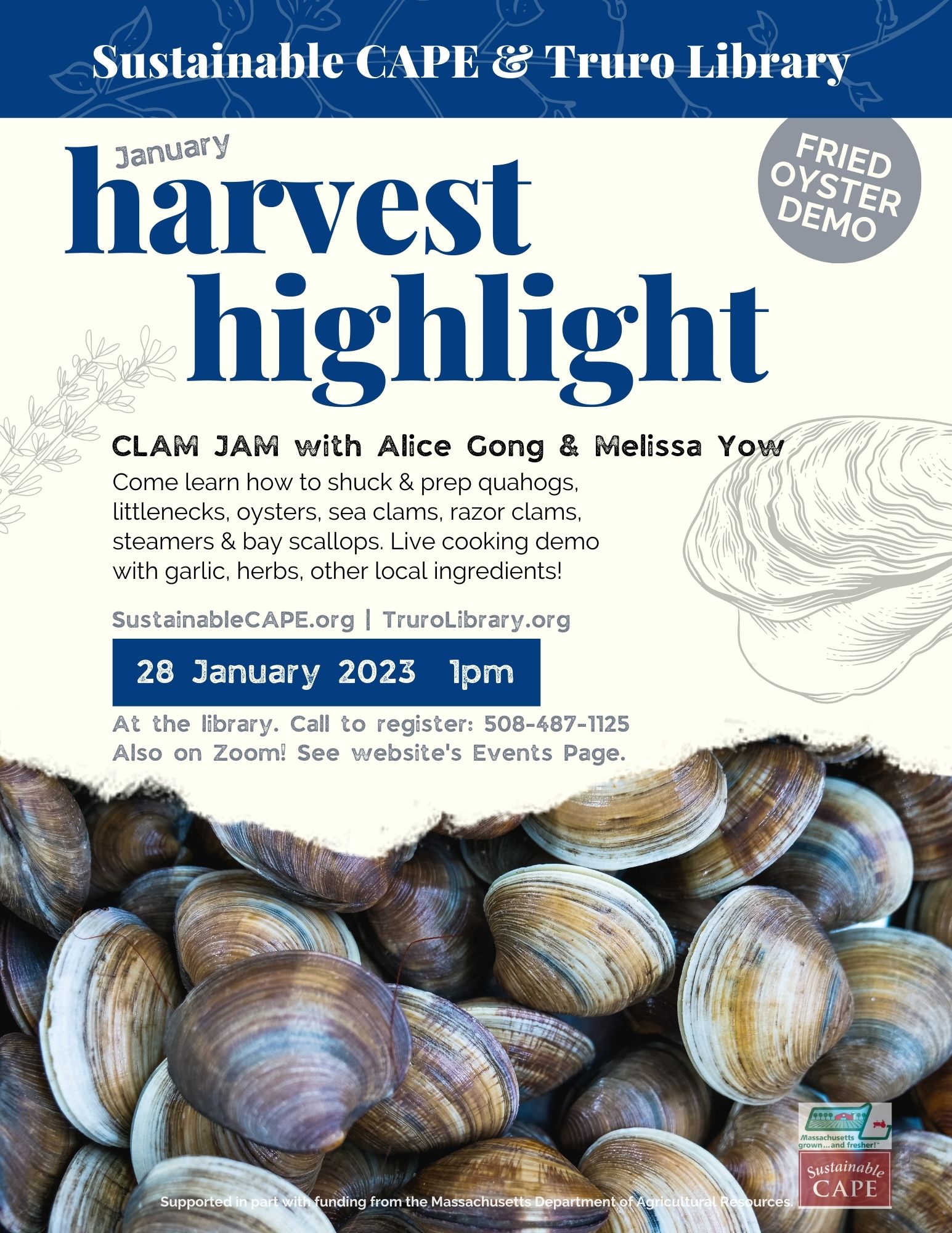 CLAM JAM with Alice Gong & Melissa Yow is back!

Come learn how to shuck and prep quahogs, littlenecks, oysters, sea clams, razor clams, steamers, and bay scallops.  Living shellfish fresh out of local waters will be there for you to see, touch, and learn how to open. Fried oysters and a delicious aioli made with local garlic will be prepared on the spot for everyone to taste & enjoy!

Melissa Yow grew up digging for clams and catching crabs around the salt marsh.  Somehow she never stopped, and continues to shellfish for a living in Wellfleet, both as a wild harvester & oyster farmer.

Alice Gong is a forager & chef with many unique talents.  She is the Program Director for Twenty Summers, sells at the Provincetown Farmers’ Market, and organizes community volleyball.   Born in Beijing, Alice now resides in Truro 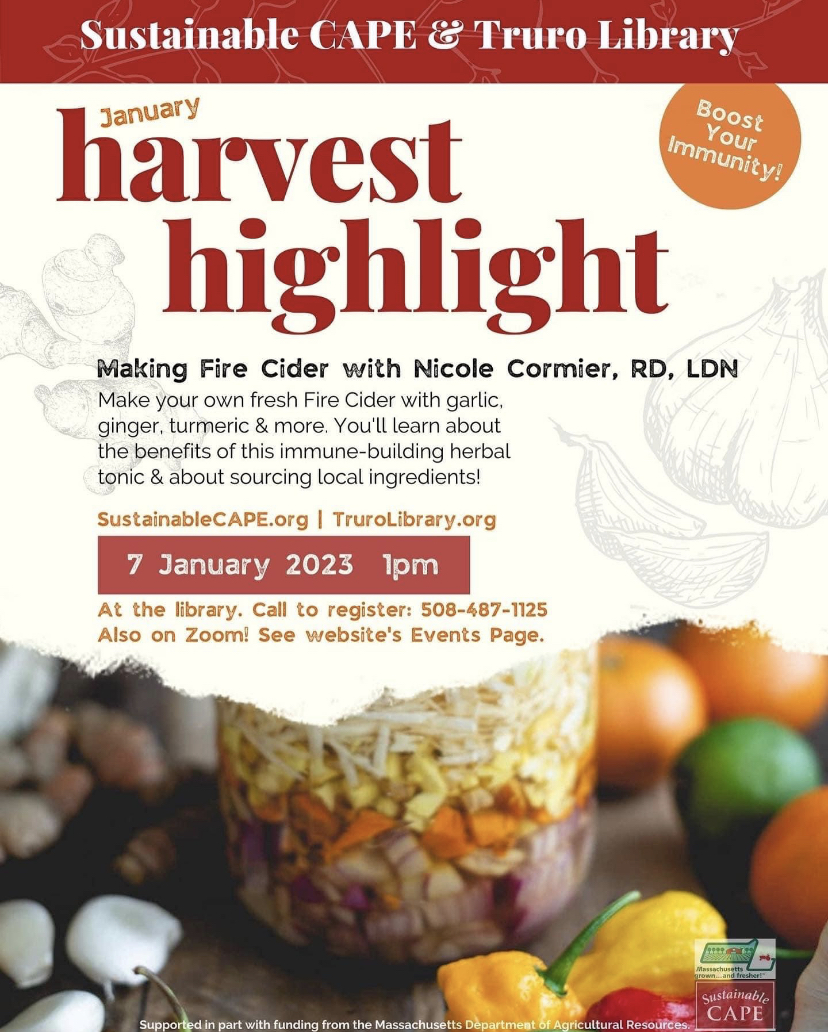 PLEASE JOIN US for a fun, hands-on workshop where you’ll learn to make your own fresh fire cider with garlic, ginger, turmeric, & more.  Registered Dietic Nutritionist Nicole Cormier will guide you in making your own batch, provide a variety of recipes, and teach about the history & health benefits of this immune-building herbal tonic.  She’ll also recommend local sources to help you gather the most potent ingredients!

OUR PRESENTER, Nicole Cormier, is an anti-diet dietitian, local food enthusiast, author, and an intuitive eating nutrition therapist. She indulges her passion for nutrition and local foods on beautiful Cape Cod through her nutrition therapy practice, Delicious Living Nutrition, and through her work with Sustainable CAPE. She graduated from the University of Massachusetts and the Beth Israel Deaconess Dietetic Internship in 2006. She founded the DLN Dietetic Internship, welcoming its first class in January 2020 to focus on dietetics in agriculture.

This program is supported in part with funding from the Massachusetts Department of Agriculture Resources.